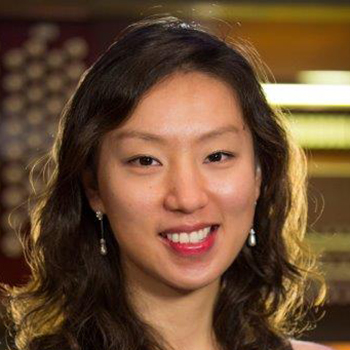 She won 3rd prize at the 13th National Organ-Playing Competition sponsored by The Ruth and Clarence Mader Memorial Scholarship Fund in 2013. Awarded Fellow of American Guild of Organists (FAGO), the organization’s highest level of certification, she recently completed her Doctor of Musical Arts in Organ Performance at the University of Southern California, studying with Dr. Ladd Thomas. Prior to her studies in organ, she earned degrees in Composition and Scoring for Film & Multimedia from Korea National University of Arts and New York University respectively.

As an active member of the American Guild of Organists, she has served on the executive board of the Los Angeles and San Diego chapters in the several roles and in 2018 directed a Pipe Organ Encounter, an educational outreach program.

In 2014, she participated in the recording of the first album of the “Hollywood Epic Brass” with in-demand studio musicians in Los Angeles. Featured at the West Region Conventions of American Guild of Organists in 2017 and 2019, Ms. Hwang maintains an active performance schedule as a recitalist and as a collaborative artist in Southern California and beyond.