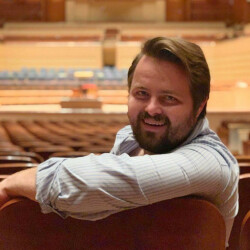 Nicholas Halbert, a San Diego native, is currently pursuing his doctorate in organ performance at Arizona State University, with Kimberley Marshall. His musical training began at 8, when he became a boy chorister at St. Paul's Cathedral, San Diego. He was appointed the Organ Scholar there at 16, and served as primary accompanist. He earned his Bachelor’s Degree at the Eastman School of Music, studying organ with Nathan Laube, and fortepiano and harpsichord with Edoardo Bellotti. At Southern Methodist University, he studied organ with Stefan Engels and liturgical playing with Scott Dettra, earning a Master’s and a Performer’s Diploma. While there, he served for one year as the Organ Scholar at the Episcopal Church of the Transfiguration, and for three years at Christ the King Roman Catholic Church.